The thyroid gland is characterized by a high concentration of selenium (Se), which is incorporated into the selenoproteins. Adequate selenium uptake (Se) is essential for the proper production and action of essential antioxidant enzymes.

Selenium a necessary trace element for the good health of the body!

Selenium (Se) is a basic micronutrient with great metabolic significance. It is a powerful antioxidant that contributes to good functioning of the immune and thyroid gland.

Selenium (Se) was the essential enzyme component for glutathione peroxidases (GPx). In particular, it was the first series of proteins where it appeared to incorporate selenium in the form of selenocysteine ​​at their catalytic center and from this the association with the antioxidant activity of selenium was created and based.

They are well known for their ability to catalyze the reduction of hydrogen peroxide and organic hydroperoxides. Therefore, they protect cells from oxidative destruction.

They are also responsible for the protection of the thyroid gland due to their ability to neutralize the excess free radicals produced during normal thyroid hormone synthesis.

Where Selenium can be Found;

It occurs almost in every cell of the human body, but most of it is found in the liver, kidneys and muscles.

Most of it is found in tissues in the form of selenocysteine ​​and selenomethionine.

⇝ Selenocysteine ​​is the biologically active form of selenium

Selenium (Se) is incorporated into the body with a large number of vital proteins, which after their incorporation are renamed to selenoproteins.

Selinoproteins are characterized by a significant antioxidant effect, contributing to the antioxidant defense of the thyroid, because they neutralize the free radicals generated during the production of thyroid hormones. In fact, selenocysteine ​​is a component derived from several selenium proteins.

Under normal conditions, selenium (Se) in selenocysteine ​​is almost completely ionized and is therefore an extremely effective biological catalyst.

Selenium (Se) is also an essential ingredient for those proteins and enzymes required in a variety of biological functions, such as:

➭ the production of thyroid hormones

Selenium deficiency is capable of causing biochemical changes capable of leading to the development of certain diseases.

In particular, selenium deficiency is able to reduce:

➾ the function of the selenoproteins

TSH stimulates iodothyronine deiodinases to convert T4 to T3, with subsequent production of hydrogen peroxide, which is not sufficiently removed from the less active glutathione peroxidases and therefore accumulates in the thyroid tissue causing thyroid cell damage with subsequent fibrosis.

➤ directly affects the repair of DNA

➤ reduces any type of immune and anti-inflammatory response of the organism and is therefore associated with a higher incidence of disease.

Selenium as a Nutritional Supplement

The human body is designed to recognize and use metals only through bioavailable forms. The body cannot metabolize synthetic and isolated forms of selenium in the same way that the minerals of plant sources can be exploited.

Research shows that organic bound forms of selenium, such as selenomethionine and selenium enriched yeasts, have the ability to be better absorbed by inorganic forms.

✓ It contributes to the health of the immune system, because it increases the resistance to infectious bacteria and viruses

✓ It plays an important role in the control of thyroid hormones

✓ Protects the entire body from the toxicity of heavy metals

The SelenoPlus Formula thanks to its composition helps 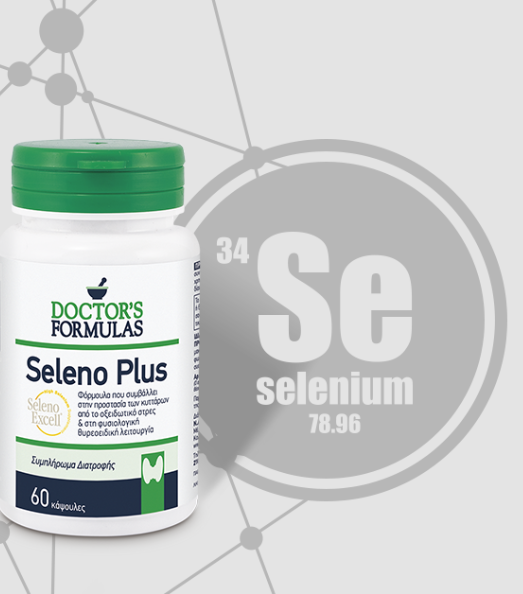 The SelenoExcell® patented formula in the SelenoPlus formula provides the best and more bioavailable form of selenium.

Organically bound metals are proportional to the forms present in the foods and have shown greater bioavailability and lower toxicity compared to inorganic selenium (Se) forms.

These key enzymes protect DNA from oxidative stress and excessive free radicals that are able to reduce the body's ability to support a healthy immune system.